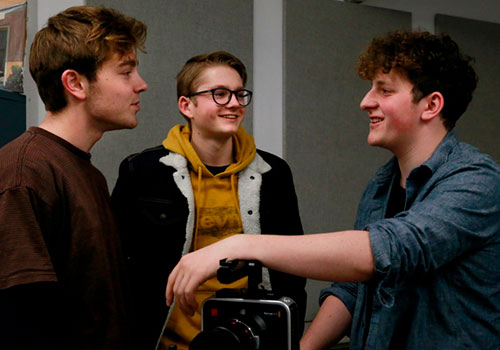 SD film teacher Jared Spires, together with filmmaking students Will Noyce, Aidan Kwasneski, and August Mesarchik were recently profiled in the following Marin IJ article. The piece was inspired by occasion of their film helping Will to be selected as one of eight finalists in the National Young Arts Foundation Cinematic Arts competition, from over 7,000 applicants nationwide.

With a short, poignant, supernatural Marin-based film in his portfolio, Will Noyce of San Anselmo took top honors earlier this month over more than 7,000 other youths across the country in the National Young Arts Foundation Cinematic Arts competition based in Miami.

Noyce, 17, a senior at San Domenico School in San Anselmo, was named a finalist in Cinematic Arts, the highest recognition in that category. Only seven other young artists received similar honors. In addition to the week in Miami learning from and interacting with top film industry professionals, he will receive a medal and cash award — the amount to be determined later, but the maximum is $10,000. One of the professionals who gave suggestions on editing was panelist Doug Blush, whose film, “Period: End of Sentence,” was nominated for an Academy Award, Noyce said.

“You submit your portfolio and all your projects,” said Noyce, who transferred to San Domenico as a sophomore from Sir Francis Drake High School in San Anselmo so that he could attend the school’s four-year-old film program.

The Miami event also offered Noyce a national audience to screen “The Redwood Grove,” a nine-minute, 36-second film he co-produced with fellow San Domenico senior classmates Aidan Kwasneski, 17, of Fairfax and August Mesarchik, 17, of San Anselmo.  The dreamy, emotional short film, shot at Roy’s Redwoods in West Marin and at rental cabins in Nicasio, has already been chosen to screen at the Mill Valley Film Festival in 2018, the 2018 Newark International FF Youth Festival in New Jersey — where it was a semi-finalist — and at the Lark Theater Student Filmmakers Showcase in Larkspur, where it won first place.

It is now posted on Vimeo for public view.

“When I was 4, my mom got diagnosed with terminal brain cancer, and died when I was 5,” said Kwasneski, who wrote the screenplay. “I’ve always wanted to write a story about loss and how people deal with it. For me, storytelling has always been a way to express the feelings that I would sort of lock up. I wanted to tell a story about someone who has lost that significant other, and just what do you do next. “I kind of feel like my mom still lives with me somewhere out there, supporting me,” he added.

Mesarchik, who composed the score, was also co-director with Noyce, who handled cinematography and photo editing.

“The most amazing part of this has been seeing something that started as a small-town, small community project, and seeing the professional reaction to it,” he said. “It’s starting to get our fingers dipped into this world that we want to go into of filmmaking.” The sole actor — and hence the “star” — of the film was Jared Spires, the group’s film teacher and head of the growing film program at San Domenico that was started at the beginning of the 2014-15 school year. The three students are all in the independent study class, which is available for seniors who have taken the earlier classes. About 60 students are enrolled in the entire program.

“It’s my first starring role, which is pretty cool,” said Spires, 33, of Petaluma. “As their teacher, it was great to be on set with them —  that way I could work with them and see where they need help.”

The film also features other North Bay helpers, such as sound designer Will Storkson, who invited the group to his home studio in Novato to do 10 hours of post-production sound additions called “foley,” or recorded sound effects that are added later to simulate the actual environment that was filmed earlier.

“Just so you know, all of the sound you hear (in the film) was all done in post-production,” said Mesarchik with a laugh. A friend of the group, Cissy Jones, did the only dialogue in the film, a voice-over reading of a poem.

All three students said their work in the San Domenico film program has sparked an interest in making a career in film. The trio also plays together in a band, “Jo Jo on the Moon,”  that opened last year for Spires’ band, “The Kentucky Street Pioneers,”  at The Phoenix in Petaluma.

Mesarchik and Kwasneski were instrumental in petitioning the school to start the film program when they were in the eighth grade.

“It’s crazy to see how far the program has come (since then),”  Kwasneski said.

After graduating in June, the three friends will be teachers at the two-week youth filmmaking summer camp at San Domenico, which is open to the public. “The Art of Filmmaking” and “Advanced Filmmaking” summer camp information can be found at sandomenico.org/summers in the “arts” section.

After that, they plan to continue studies in Southern California, either at Chapman University in Orange County or at Santa Monica Community College.

Noyce said he has been excited about making films since he was 9 years old. He said the San Domenico program gave him the feeling that he could take his passion and earn a living from it.

“I’ve always done it (making movies) outside of school,” Noyce said. “Coming here, having the space to do it in class, made me realize that it’s not like a hobby. I can actually do this. I can make a living. I can do what I love.”