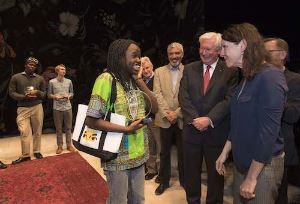 From a field of 20,000 student competitors nationwide, senior Ogechi Egonu (pronounced Oh-getch-ee Egawn-u) won the 34th annual English-Speaking Union (ESU) National Shakespeare Competition in New York last week! Fifty-four finalists gathered from across the United States to compete in the finals on the Mitzi Newhouse Theater stage at Lincoln Center. Ogechi's award was presented by the noted actor Kate Burton. As the winner, Ogechi received a full scholarship to the American Shakespeare Center Theatre Camp in Staunton, VA this summer.

Ogechi won the ESU San Francisco competition earlier this year. She performed a monologue from "Othello" and Sonnet 18; for the finals she performed both again, in addition to a "cold reading" of Petruchio, from "The Taming of The Shrew."

"Ogechi worked very hard, and absolutely deserves this win," said Jen Grimes, Upper School theatre teacher and Ogechi's coach for the competition. Jen accompanied Ogechi on the trip to New York. "The 54 young actors in this final round were incredibly talented, and obviously very hard-working as well. Ogechi approached her work with dedication, intelligence, and with joy in the process. She earned this, and I am very, very proud of her. She had only ten minutes to prepare for the cold reading and it was amazing!"

Among the winners and finalists of the Competition who have gone on to national acclaim are Emily Bergl (Shameless, Desperate Housewives, Southland); Tyler Hilton (Walk the Line, One Tree Hill); and Heather Lind (Demolition, Boardwalk Empire, Turn: Washington's Spies).

The English-Speaking Union National Shakespeare competition is a education-based program designed to help students develop their speaking and critical thinking skills and their appreciation of literature as they explore the beauty of the language and timeless themes in Shakespeare's works.

Join us in congratulating Ogechi and Ms. Grimes on this momentous victory. You can see Ogechi's performance and win in the videos below. You can also read more in the news: