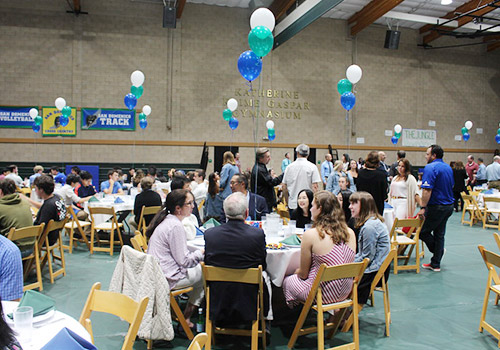 This year's Upper School Athletic Awards Banquet was a festive celebration of our first year participating in the competitive BCL-West League. Students, coaches, parents, and friends gathered together to honor the effort that went into creating some great results in our first year in a new league. It was also a time to celebrate our first graduating class of Trailblazers - the first all coed class to graduate from San Domenico. Adding Men’s sports into the mix of our offerings has been by all accounts a very meaningful and successful change, and the athletes cheered each other on every match, meet, and game throughout the last four years!

Many SD athletes were recognized for various awards. These included the single 12-season athlete in Siena Greenberg, Thomas Kunze and Kwan Limbhasut as recipients of the Marin Athletic Foundation’s “The Eva & Mario Ghilotti’s Outstanding Student Athlete Award”, Thomas Kunze for Panther of the Year and Scholar-Athlete of the Year, and Siena Greenberg as Panther of the Year. The Coach’s Awards presented throughout the year at the seasonal Sports Assemblies are listed below, along with the BCL All League award recipients.

Whether trying a new sport for the first time, or pursuing a collegiate path, at SD student athletes can find their place and make their mark. Our scholar athletes show this to be true every day and our coaches lead the way. Go Panthers!