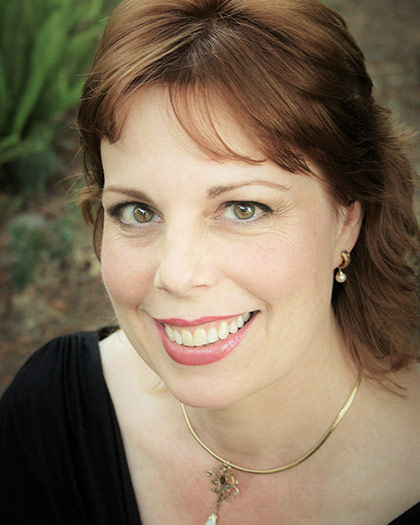 Soprano Wendy Loder has delighted San Francisco Bay Area opera audiences with her vivid portrayals of Adele, Adina, Blonde, Cunegonde, the Dew Fairy, Fanny, Frasquita, Fiorilla, Fiordilidgi, Gilda, Gretel, Lauretta, Nanetta, Olympia, Queen of the Night, Miss Sweetsong, Violetta, The Vixen, and Zerbinetta. In addition to her operatic activities, Wendy has been featured as soloist in in Orff's Carmina Burana at Davies Symphony Hall, and Mahler’s 8th Symphony. She has also appeared in Poulenc’s Gloria; and in Mozart’s Great Mass with the San Francisco Choral Society and the Magnificat Orchestra. This past fall she sang with the San Francisco Opera Orchestra in a reading of Gordon Getty’s new opera, “The Canterville Ghost”. She has performed in concert with guitarist Eric Symons in San Jose and Oakland, and is looking forward to singing Barber’s “Knoxville, Summer of 1915” with Marin’s ECHO Chamber Orchestra in June.

In recital in Bonn, Germany, Wendy was praised for her “effortless height of a voice that combined radiant power with great sureness in intonation and dynamics. Furthermore, she presents herself as a singer who knows how to be convincing with charming-capricious theatrics.”(General Anzeiger, Bonn)

She has been heard on several T.V. and radio commercials, as well as movie scores and video games. She also produced & sang on her first CD, “Yestertime Songs for Children”, available at CDBaby.com. She is also featured as both violinist and singer on a recently released CD “Serenata”, a collection of unique music from Italy, France and Spain, also available on CDBaby.com.

In addition to her performance activities, Wendy directs music for the Trinity Lutheran Church, and teaches voice, violin, and piano. Her students have performed with San Francisco Opera, Lamplighters, San Francisco Girls Chorus, YPSO, Marin Symphony Youth Orchestra, and have been featured as soloists on video games. She is happily married and the proud mother of two beautiful daughters.

To hear Wendy singing in concert with Marin Echo Chamber Orchestra, in Samuel Barber’s “Knoxville, Summer of 1915”, performed on June 11, 2017, see below.