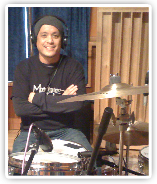 Lex grew up in Mill Valley, California, and his first introduction to drumming started at ten years old. The age where most kids studied piano, he was drawn to the drums. “My first recollection taking lessons was with this elderly man in San Francisco whose background was in jazz. Traditional grip and rudiments were his focus.” At ten, “I was really amazed because when he demonstrated his chops on his Remo practice pad kit, his hands were lightning-quick and precise. I was blown away.” Some of Lex’s influences growing up were John Bonham, Stewart Copeland, Steve Gadd, Louie Bellson, and Buddy Rich. Later he discovered Elvin Jones, Tony Williams, Clyde Stubblefield, Jabo Starks, and Zigaboo Modeliste.

While in high school, he developed his skills playing with friends and listening to records. It wasn’t until college that he began studying percussion under professor Eugene Novotney and later with legendary jazz drummer Eddie Marshall. Since then he has developed his own voice for the instrument. “I think this is very important. A way to accomplish this is to play different styles with different people and allow yourself to play outside of your normal comfort zone. My “voice” has grown while playing in several different projects ranging from my local hip-hop group, Calm-o-dee, to my jazz quartet, to my mainstay, Vinyl."

Based in San Francisco and Marin County, he has been involved in the music scene for fifteen years and teaching for about six. In 1996 Lex became a founding member of the Bay Area Latin-funk band Vinyl. (Vinylgroove.com). He has had the opportunity to record and perform with Les Claypool (Primus), founding member of P-funk, Bernie Worrell, and of course, his mates in Vinyl. Currently he teaches drums and percussion at A Drummer’s Tradition in Marin County. “I now have the opportunity to share my knowledge to students here at San Domenico, and I’m looking forward to working with a great music conservatory!”