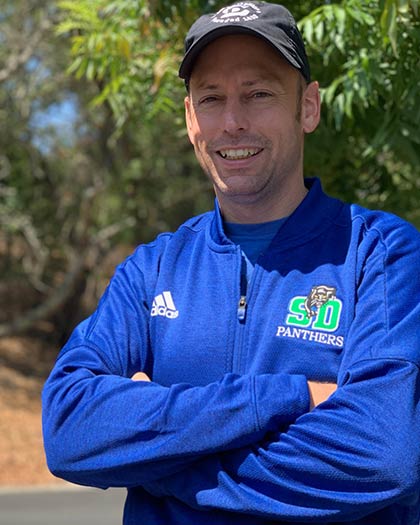 Mark Churchill has been an educator for the past fifteen years, having worked at both public and independent schools on the east and west coast. Growing up in rural Vermont, Mark began his teaching school at his alma mater in the small town of Morrisville, Vermont. Here, Mark taught middle school math and coached high school track and cross country for eight years. During this time, Mark created interdisciplinary units designed around the Iditarod, which engaged students in the local outdoor culture. Mark lead his teams to over 20 state level individual and team championships in cross country, nordic skiing, and track and field. Mark moved to the Bay Area midway through his career in teaching and taught and coached at the Chinese American International School. During this time, Mark joined the faculty and students on four international trips to China and Taiwan. Mark then transitioned to Dean of Students, and played a pivotal role in student activities and leadership. Three years ago, Mark joined the San Domenico faculty and staff as Dean of Students in the Middle School level, and our sixth grade math teacher. Mark has been the Head Cross country and Track coach in the Upper School and San Domenico. Mark is also the co-chair of the Emergency Preparedness Team. Mark is the first person to volunteer to dress up as a superhero in an assembly, compete with the students in a relay, and take a pie in the face for a good cause.

“My favorite part of being a member of the San Domenico community is engaging in school spirit events with both the students and the faculty.”