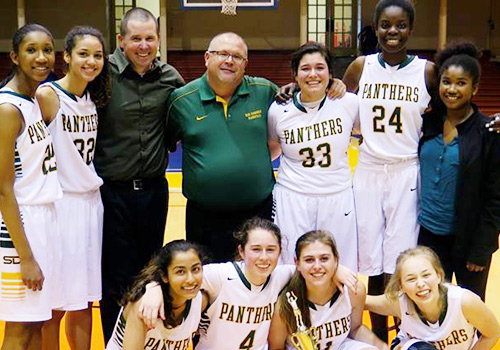 Please join us in congratulating Coach Mike Fulton for the honor of being inducted into the College of Marin Athletic Hall of Fame Class of 2015.

The goal of the College of Marin Athletic Hall of Fame is to recognize the outstanding achievements of its former student athletes, coaches, and friends of the athletic program.

Coach Fulton is a native of Marin County; he played basketball at Drake High, College of Marin, and Cal Lutheran University. He has coached at Terra Linda High School, The Branson School, and led the College of Marin women's basketball program to top ten rankings several times in his tenure as coach.

As Head Coach of the 2014-2015 Girls Varsity Basketball team, Coach Fulton led the Panthers to a winning year including the BCL Central Championship, NCS Division V semi-finals, and the Nor-Cal State Tournament quarter-finals. Throughout their season, under the guidance of Coach Fulton, our team demonstrated tremendous teamwork and exemplary sportsmanship.

Coach Fulton is an integral part of the Marin athletic community and we are blessed to have him as an Athletic Director and Head Coach of our Upper School Varsity Basketball team.

For more information about tickets to this event, please call Lindsay Bacigalupi at 415-485-9580.