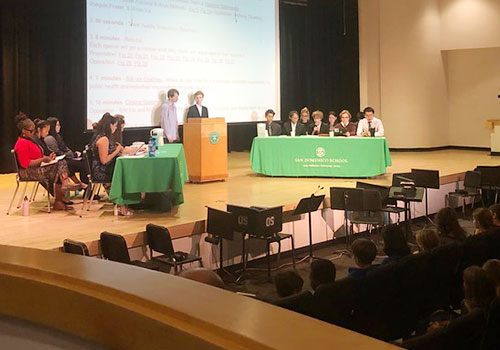 According to the 2019 National Youth Tobacco Survey one in four youth between the ages of 12 and 17 have tried vaping nicotine or THC at least once. There are daily headlines about vaping related illnesses and new law suits are being filed against the producers of ENDS (electronic nicotine delivery systems) on a weekly basis. Administrators, schools, and educators across the country are grappling with this crisis; namely, that a new generation is becoming addicted to nicotine through vaping.

On November 20, the Upper School Biomedical Ethics class moderated and led an Oxford style debate with and for the entire Middle School which examined and posed the question, “With recent deaths and medical and health risks, should e-cigarette companies be held responsible for their products?” [A no vote means individuals are responsible for the effects of e-cigarette/vaping products.] The debate consisted of two moderators, one from the Upper School Biomedical Ethics class and one from the middle school. The teams included four students, two from the upper school and two from the middle school. Additionally, each team had a coach. The proposition team was coached by Nurse Toni Scott and the opposite team was coached by middle school history teacher Joanna Mueller.

The Biomedical Ethics class spent the last month researching the topic using scholarly research to understand what the scientific evidence reveals about the health impact of the ENDS products. They also examined company policies and mission statements which reveal why these products were made and what they were intended to do. The Upper School students coached the middle school debate teams to be able to conduct an opening statement and rebuttal.

Research shows that when students teach their peers the message is more effective. The collaboration between students, teachers, counselors, and administrators in the middle school and upper school for this project has been meaningful and added depth and multiple dimensions to this project.

At the end of the debate middle schoolers were asked to take a position on the proposition in an anonymous survey. Students were then led by an upper school biomedical ethics student to reflect on the debate with their advisory groups following the debate. This allowed all students to contribute to the discussion and share their thoughts on this current health crisis.