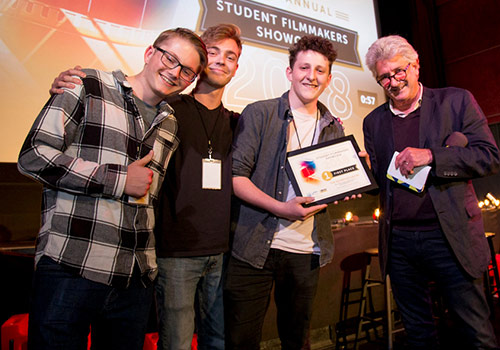 San Domenico students Will Noyce, Aidan Kwasneski, and August Mesarchik, have created not one, but TWO award-winning movies. "The Redwood Grove", a ten-minute short about a man who is trying to move on from his past, won First Place at the 2018 Lark Theater Student Showcase, while "Backyard Bees", a 3 1/2 minute documentary about bee-keeping, took Honorable Mention.

The Lark Film Festival was just the beginning for these students however. Both films have also been accepted into many other film festivals including The Newark International Film Festival and the local Mill Valley Film Festival!

Come celebrate these young filmmakers and join us at a screening at the Mill Valley Film Festival's 5@5 compilation on Sunday, October 7 at 11:00 am, and Friday, October 12 at 12:00 pm. Make sure to get your tickets soon because they're going fast.