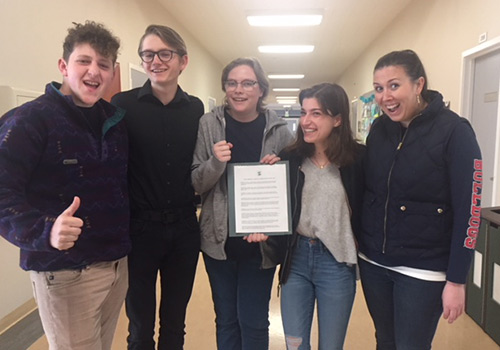 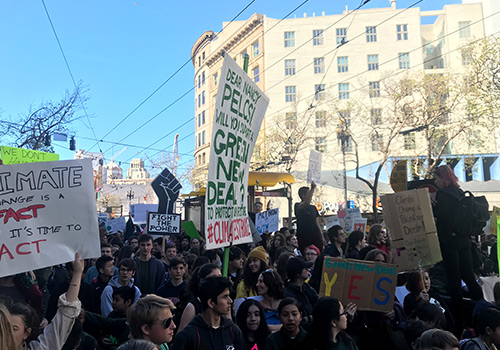 From participating in the Bay Area Strikes Back to signing a resolution as part of Schools 4 Climate Action, SD students are taking action against global warming.

As quoted in the Marin Independent Journal: Several thousand students walked out of school at cities around the Bay Area on Friday March 15, as part of an international protest seeking more attention to climate change, and policies such as expanded solar, wind and other renewable energy, to address it.

Across the Bay Area, in Silicon Valley, the East Bay and other locations, marches were planned at dozens of schools. 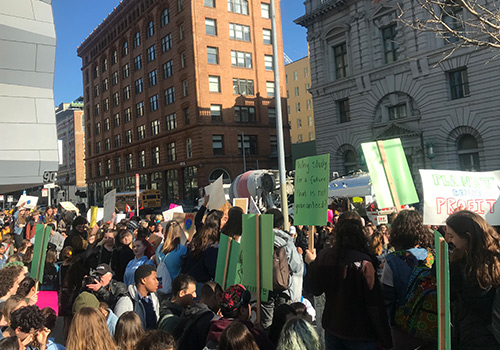 San Domenico High School junior Luci Paczkowski was among those who gathered in San Francisco. A cofounder of the youth organization Generation: Our Climate, Paczkowski said she and other students were able to meet with Pelosi’s chief of staff where they discussed Pelosi’s views on the proposed Green New Deal resolution and to establish a working dialogue.

With a United Nations report by international climate scientists giving the world a short timeline to reduce greenhouse gas emissions before irreversible impacts occur, Paczkowski said the protests by the world’s youth send a clear message that legislative change needs to occur now.

“We still have a say in what happens to us in the future,” Paczkowski said.

The following week, San Domenico's Upper School Student Council passed a Climate Change Resolution calling for Congress to take action on Climate Change. As a result, San Domenico will be represented with other schools across the nation whose students have signed this resolution. Schools 4 Climate Action, presented all of these resolutions to Congress.  Please send them good thoughts!

Additionally, on Thursday, 3.28.19 more than 150 youth and 50 adult allies will converge on Capitol Hill to send a clear, non-partisan message from the education sector. Congress has a moral imperative to act quickly and boldly on climate to protect young people and future generations.

Congratulations and thank you to our students involved in this effort, for their continued leadership for environmental and social change! They will present to the San Domenico Board of Trustees in April.