SD Scholar Athletes Shine On and Off Campus
January 27, 2020 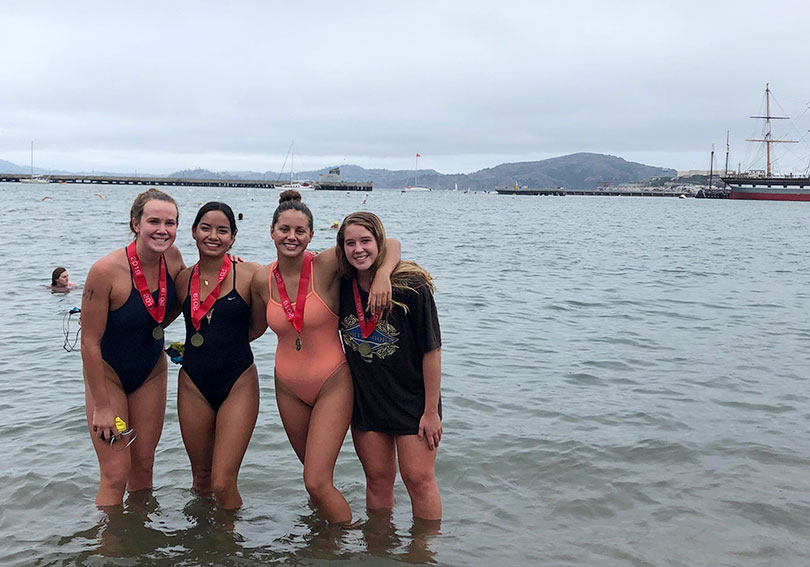 Senior Sophie Keith-Brown recently participated in The Alcatraz Swim, an annual open water race from the notorious Alcatraz prison to Aquatic Park in San Francisco. The distance is about 1.2 miles in freezing water and over 600 people swim it each year. This September, Sophie and her sister Emma ’22, did the swim with their club swim team as an extra challenge to start the year. Their team did really well, with everyone placing within the top 30 out of 600 swimmers

“We couldn’t wear wetsuits,”Sophie said, but people get used to the cold after a few minutes! It was great fun and my favorite part was treading water out in the middle of the Bay and looking around at the Golden Gate Bridge, the San Francisco skyline, and Alcatraz, pausing to take in the scenery!”.. Sophie and Emma definitely want to take part in the race again, saying, “Despite the challenge, it was so much fun and a great learning experience!” Brrrrr...we’ll leave the cold water racing to these two. Thank you for sharing your story with us, and continued success in your swimming endeavors.

Meanwhile, Sophomore Chase Weaver is a part of a team of a five-person team that competes in the Spartan Races, a global leader in obstacle racing. He participated in four Spartan races in 2019, with "The Beast" the longest of the four races, involving a half marathon with 30 obstacles.  Chase has completed two different "Sprints," which consist of a 5k with 20 obstacles, and one "Super" which is a 10k with 25 obstacles.

Chase recently had the privilege of traveling to Seattle Washington to compete in this year’s The Beast. He traveled with a smaller team, only three people, and got to see the city of Seattle for the first time! Three students ran as a team, and managed to come in First, Second, and Third in their age group, with a time of two hours and 43 minutes of non-stop running along with tough upper-body obstacles. Their team also "product tested" Lululemon shorts in their last race, and are working on building a profile with Lululemon to possibly advance the partnership. Chase says, “These races have been amazing experiences, and we have a goal to do at least six total in 2020.” Good luck to Chase and his team, and we wish them continued success in their Spartan Races!