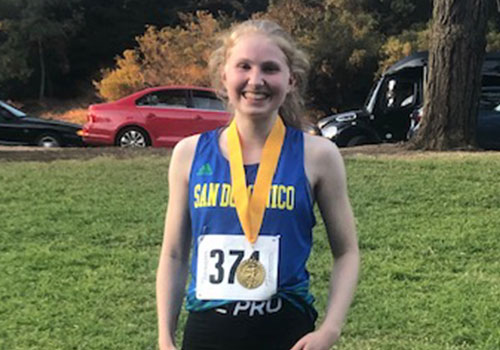 Heidi has approached each race and practice with a calm and positive demeanor. It has truly been inspirational to watch this athlete approach each race with a goal and then go after it. She has learned who her competitors are in the race and has chased them down. In doing so, she has improved her time in every race run this season.

During practices, when she hears someone say something negative, she quickly spins it and reminds her team-mates that they will always feel better after the workout is over and they will be so happy they have run. She is mature beyond her years, never blinking an eye when she is told how early the team will be running or how far they will be running.

Coach Mary Churchill says of Heidi, “She has been a joy to coach because of her ability to respond to directions and her ability to set goals. She has set new school records at the BCL Championship course and continues to grow as a standout runner. She has lead our team all year long in every meet we have run in. She has finished in the top ten at every league race we have had and has received honors at each invitational we have run in.”

Heidi was new to running cross country this year as a sophomore.  She very quickly realized that she was talented, and that combined with her work ethic moved her up through the standings each race. Heidi broke the school record for 5 kilometers at Lindley Meadows in Golden Gate Park. She has a really good chance to be the second qualifier in SD history for the State Meet in Fresno. This year’s competition is stronger than in years past, but Heidi is up for the challenge, according to Coach Mark Churchill.

Heidi Meier is focused, competitive, committed, and kind to all of her team-mates which made her the recipient of the team’s MVP honor.

Here, Heidi shares her reflections for a #FacesOfSD Panther Spotlight:

Q. What is your name, where are you from, and what sports do you play at SD?

A. I am Heidi Meier and I’m from Munich, Germany. In fall I did Cross Country, and right now I’m playing soccer.

Q. You have been chosen as a Panther Spotlight for your performance in Cross Country this season, your coach refers to you as focused, competitive, committed, and kind to all of your team-mates. You also received the MOST VALUABLE PLAYER award at the fall awards ceremony. How has this season been from your perspective?

A. This season was awesome! We grew together as a team and always supported each other and had the support of our coaches! Throughout the season everybody was getting more ambitious and we improved so much! No one ever gave up in the races, and the meets were really fun although exhausting! And all the activities we did, like going to Lake Tahoe, or after meets when we went to dinner, were so much fun!

Q. What is your biggest accomplishment? Did you set a goal for yourself?

A. I think my biggest accomplishment was that I improved every meet and I just have the goal to give my best every time.

Q. What does it mean to you to be a student-athlete at SD?

A. You come into a new family. The people I spend my time with here are awesome and I can always talk to them. Sometimes we cry together, sometimes we laugh together. It was so much easier for me to get in touch with new people and they helped me a lot to integrate. I’ll miss this team!

A. Thanks to the coaches and the team who made this season so awesome!