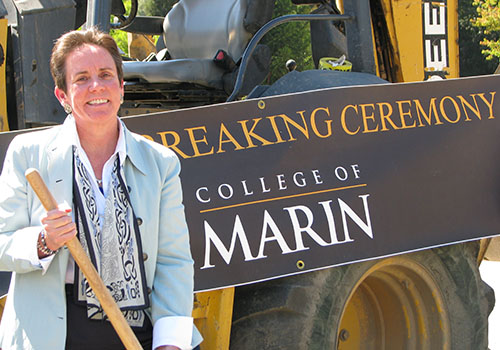 Leadership is such a hot topic these days. World leaders vie for power on the global stage. Business and NGO executives impact every sector of for-profit and non-profit endeavors. Athletic and celebrity role models step up as activist leaders and teachers develop the next generation of global initiators. Reflecting on the theme of leadership for this issue, we reached out to some of the leaders in the SD community, to get their perspective on leadership. Herewith, a special selection of #FacesOfSD.

Wanden Treanor is an attorney, Marin Women's 2017 Hall of Fame inductee, and alumna of the Class of '73.

Tell us a bit about your role as a leader in your work.

My first experience as a 'leader' was the year that I was Student Body President of San Domenico. I learned a tremendous amount in that role, most importantly that the role is not about the person, but the leadership the person in that role must exercise. There were many things that had to be done each morning in the morning assembly and countless activities that had to be organized and executed during the year, so planning and delegation were key skills I had to develop to do an effective job.

Over the past three decades, I have had the good fortune to have provided leadership as president of the board of directors of several nonprofit organizations, including Legal Aid of Marin, 10,000 Degrees (formerly Marin Education Fund), Planned Parenthood of Marin, Sonoma & Mendocino, as well as having served several times as president of the Board of Trustees of College of Marin.

What is one characteristic that you believe every leader should possess?

The ability to collaborate is a critical characteristic of effective leadership. A great leader is able to encourage others to do their best and then make sure that the credit goes to the group, not to individuals and certainly not to the 'leader'. I also think the board leader has to be a chameleon, in that you can't show favoritism, you have to work with diverse individuals and you need to adjust your style and expectations so everyone is responsive to and respectful of differences.

What challenges you most about being a leader in your field? Has that changed over the years?

It was a great honor to be elected as President of the Marin County Bar Association. I learned a tremendous amount about how to ensure meetings are run efficiently and effectively so that everyone contributes, but no one contributes too much. Having to control a board meeting of 20+ attorneys—all with opinions, all wanting to share their opinions and having to conduct the business meeting within the 90 minutes allocated during the lunch time was not an easy task. The greatest challenge was to make sure that all voices were heard, that the loudest and boldest wasn't given too much airtime, and to make sure that minority opinions were adequately presented. After having to shepherd 20+ attorneys and get the work of the board accomplished in the meetings, no other group has been as challenging to lead. It was a tremendous learning opportunity.

I believe the experience as president of the Marin Bar taught me a lot about leadership and those skills have grown over the years. For the past decade, I have been teaching community college trustees from throughout the State of California about how to be an effective Board Chair. I distill the basic skills of effectively leading a board meeting into three 'C's:

Cop - keep the traffic moving, make sure everyone participates and limit those that have spoken or are repeating;

Conductor (of a symphony) - assure execution of the mission, needs to know the piece better than anyone, must understand the nuances, stay on top of timing and control the tempo.

The skills required and developed to be an effectively leader have changed a lot over the years. Individuals from different generations communicate in different ways, so it is essential to recognize that not everyone wants to come to deliberate or dialogue at a meeting and would rather make all decisions via email or text. Others don't text and need the human interaction to truly evaluate options and opportunities. Differing communication skills and/or needs are not right or wrong, so the leader needs to be agile and willing to work with all generations' needs and expectations.

How do you encourage creative thinking within your organization/company/work?

Having a willingness to be open to new ideas, new approaches to problem-solving, new modes of communication and outreach, are all skills that will take a board/group of dedicated volunteers/co-workers to another level of engagement and creativity. I find it is also helpful to use ice-breakers to allow all board members to get to know each other as human beings. Such activities are best utilized in the context of less structured or less formality as found in retreat/advancements. Properly selected activities can allow everyone to break down their pretenses and to genuinely and authentically engage as individuals working together on a common mission. Allowing each board member to speak to what the mission means to him/her, or to share why involvement in the organization is personally meaningful, lets everyone understand why each person has agreed to commit their time, talent and treasure to the organization. The more you are able to create a shared vision, the more successful the board will be.

What are the risks or disadvantages in leadership that you didn't expect or anticipate before starting?

There are hard issues that must be addressed and there are times that the leader must discipline or hold others accountable for not meeting the shared commitments. It isn't a popularity contest and some people may not end up liking you for what you have to do in your leadership role.

Political campaigning is very hard, but also invigorating. The need to raise a lot of money to pay for the mailers, so you can reach the voters, isn't 'fun'. It is also hard when some groups decide to do a 'hit piece' to push their agenda, but it is all part of the political reality. Meeting with voters and speaking publicly about the issues is genuine honor and something I really enjoy.

How do you find consensus when your team disagrees on an important decision?

It is foolish to think that people with different life experiences and expectations can always agree on important decisions. In fact, you need diversity of opinion to be expressed so that the end result is a decision made after thoughtful and through deliberation. However, there are certain decisions that warrant unanimity, such as the hiring of a college president. While some trustees may have a preference for another candidate than the majority may feel is best for the college, at the end of discussions, and once it is apparent there is a clear majority for one candidate, the board should vote one last time unanimously for the new college president. I sets a supportive start and the potential for the new CEO to hit the ground running.

I was president of the board of the Marin Education Fund the year that the organization decided to change the name to 10,000 Degrees. It was not an easy process and not every donor or board member was happy at the the end with the name or with the process. It was hard to build consensus around something so significant. Removing "Marin" from the organization's name was difficult for many of us lifelong Marinites, but it was critical to do so once the decision was made to expand the mission into Sonoma and Solano counties. In addition, removing the word 'Fund' was also challenged by some donors, who felt it helped to explain what the organization did. However, what the organization was doing well was also changing and expressing the goal of creating opportunities for 10,000 degrees was a name charged, meaningful and truly reflected the work of the organization. It was hard work to be the board leader at that time. We had lots of meetings with donors and eventually, we just had to move forward proudly and boldly.

Can you name a person who has had a tremendous impact on you as a leader? Why and how did this person impact your life?

Barbara Boxer, who spoke to us in Alumnae Hall in 1972 opened my eyes to the fact a woman could go into politics. She was smart, strategic and driven to work for progressive causes, to represent the under-represented and to put women's health, and equality for women and girls at the forefront. She is a genuine leader, has no apologies for her directness and is proud of how tenacious she is on important issues. I was fortunate to be able to work with Barbara on her congressional campaigns and got to know her on a personal level. She taught me a lot about what it takes to run for public office and how you can't let personal campaign attacks slow you down, get your attention or take you off your path. If you know you are doing the right thing for the people who can't be able to speak for themselves, you will find the strength to continue.

Sandy Donnell, who is a Dominican lower school grad and with whom I had the pleasure of working with on the 10,000 Degrees board, has been a model community leader. She is unpretentious, dedicated, and a giving member of our community on many levels. She has served on numerous boards, mostly for organizations helping youth, and she served on the Belvedere City Council for two terms. She is self-effacing, willing to roll up her sleeves and do whatever needs to be done, she reaches out to her broad network for donations, in kind support, and is freely giving of her time and treasure to support causes she believes in and for the success of a fundraising event.

My partner, Judge Faye D'Opal, is an extraordinary community leader. Over the past 33 years, I have learned so many perspectives, sensitivities, and skills from her. She was a leader in the Peace Corps both in Latin America and in Washington D.C. where she learned the critical nuances of working in multi-cultural environments and the need to accept people as you find them, not to impose other cultural standards or to judge differences. Prior to going on the Marin Superior Court, Faye was instrumental in creating the Legal Self-Help Center, to provide no-cost legal services and was its first director. She was also president of the Marin Community Foundation and worked to expand the foundation's program funding to organization working to eliminate poverty and to expand opportunities for children born into poverty.

What is one mistake you witness leaders making more frequently than others?

Not shining enough light on the good work of the group, of failing to acknowledge the work of others, taking too much credit to self.

Where do the great ideas come from in your organization/in the work that you do?

Great ideas don't come from ONE person, but rather the collective brainstorming, problem solving, dreaming, visioning, and trying to be open to all ideas.

For more, visit www.sandomenico.org/FacesOfSD or contact admissions@sandomenico.org.
Share to FacebookShare to TwitterShare to LinkedInShare to PinterestShare to EmailPrint this page