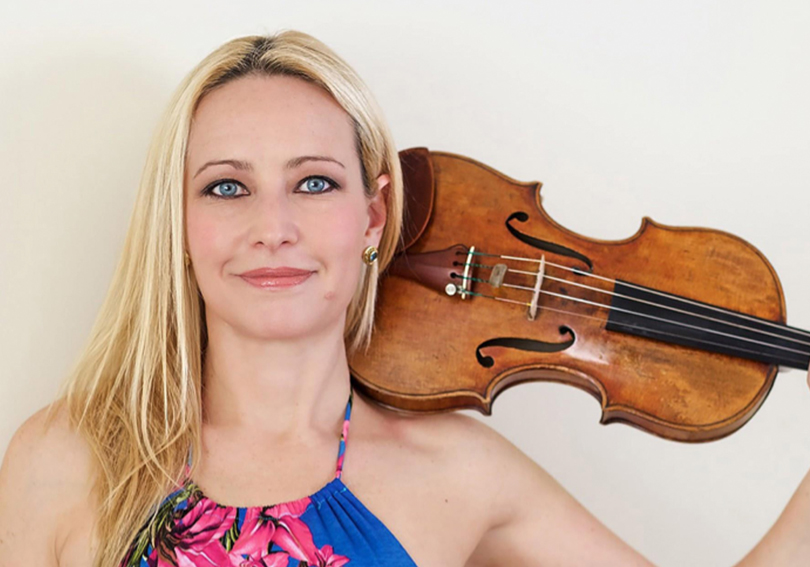 Melissa Reiner ’92 is a multitalented violinist whose career has included performances and recordings with the Royal Philharmonic, Adele, and the film score for the Hobbit movies. Although classically trained, she mostly plays pop and rock music now. A graduate of the Peabody Institute at Johns Hopkins University, she lives in London and maintains a global career as a touring and recording artist.

Reiner knew from the age of 14, when she attended the prestigious Aspen Music Festival, that she had the talent to make a career as a musician. The older she got, the more her confidence in her abilities grew, particularly during her last two years of high school, which she spent at San Domenico. Her strongest memories from her time at SD is the sense of camaraderie she felt with her classmates, in addition to fierce competition. Her confidence grew as she felt supported by the “sisterhood” of her peers. Reiner is one of the most sought-after recording violinists in the world, but her humility and willingness to be open about her journey really struck me. And she is more than willing to poke fun at herself and drop one-liners about the current state of global affairs.

San Domenico was a transformative experience for Reiner, not only because of how much she learned academically, socially, and musically, but also because of the international students she got to know. The friendships she formed as a student in SD’s Virtuoso Program helped foster her desire to travel and explore the world. “Classical music as a whole is a really internationally focused career,” she says, so the relationships she built with students at San Domenico laid the foundations for her future. Reiner told me that her curiosity and love of asking questions has helped her immensely when she’s traveling and learning about the places she visits.

After graduating from Peabody, she moved to Los Angeles. Although she loved her time there, which included a world tour as the lead violinist for the Jonas Brothers, several appearances on the Grammy Awards and on American Idol, she prefers living in London, because it gives her a sense of being globally connected.

Since moving to the UK, she has gotten to work with Oscar-winning Indian composer A. R. Rahman and has been “blown away” by Indian classical musicians’ ability to improvise. She says “working with musicians from other cultures has broadened my knowledge of the art.”

Reiner really enjoys how different audiences react to performances. In Japan, the audiences don’t clap and cheer wildly, so she has learned to admire the subtlety with which the attentive audiences there express their admiration.

She is continually struck by the “interesting dichotomy” of stepping outside of the five-star hotels where she stays and witnessing how poverty manifests in many third world countries away from the elite concert halls and wealthy patrons. To her, being a global citizen means “being aware of the world as a whole.” Since moving out of the States, she has come to appreciate how much Europeans “care about things beyond their borders.” According to her, the most important part of being a global citizen “is being aware of your privilege.”

Unlike some musicians, Reiner has also maintained a love for academic subjects and other hobbies. Always fascinated with English, she recently pursued a masters degree in creative writing and is working on a novel. She believes that sometimes musicians lose sight of their other skills. In high school, she was equally focused on music and on her grades, telling me that she “always expected excellence” of herself. She dabbles in entertainment journalism and recorded a TEDx talk in 2015 about listening.

When asked what advice she would give to a high school student, she laughs. “Keep your spirits up, keep being confident, and keep practicing.”